So, everyday since my post the other night, I have been bike riding around my neighborhood. In fact, that’s what I’m doing now. I just wanted to get down my impressions of the night before I forgot, so instead of passing my house I ran inside and grabbed my computer. Started typing. I’ll head back out after this. Okay, focus. Thoughts While Riding My Bike. 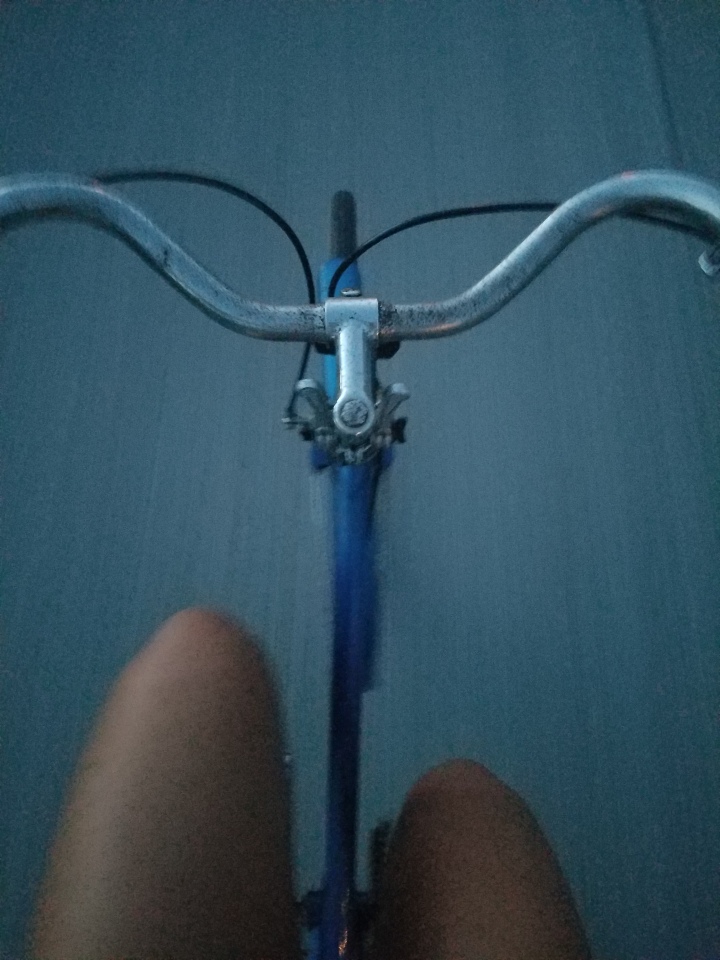 I’ve seen parts of my neighborhood that I’ve never seen. Every night I venture a little bit further from home.

Everyone, everywhere I go, checks out my bike. I’m not delusional. It’s the hottest thing on wheels out here.  These other bikes are standard. I’m a snob now. My bike is vintage; Stranger Things reminiscent.

I’m in Stranger Things. I turn a corner and the boys are right beside me, and lifting our butts off the seat, we struggle up a hill, the handle bars swaying as we climb.

Damn, when we were kids we could ride our bikes for hours, never getting tired. We’d be everywhere. I’ve been on this bike 5 minutes and it feels like I’ve been doing squats for 10. This feels good. That muscle on my inner thigh is sore. The bottom part next to the knee.  Adjacent the large quad muscle. (That may have been too many clues. Did that seem condescending because I was going for a sort of medical precision…) I remember, with utter elation, that this muscle has been the hardest muscle in my body to push toward growth. I’ve tried so many things. All along it’s been bike riding. How about that.

I’m listening to music. I love riding with music. Yet, when we were kids we never had music; not until later. Sure those Stranger Things kids have The.Best.Fucking.Soundtrack of the past century, but not me. Not us. How did we get by without music on our bike rides?

Life. That’s the answer. Life was our music. Yes, this is the cheesiest thing I could have possibly said in this moment. And guess what? It’s still true. Life was friends and bikes and wind in your hair and wind on your face and checking for cars and possibility of adventure if we just keep searching, go a little further. It’s out there.

I’m getting better at figuring out my moves. Being more decisive about crossing roads. My confidence is growing. I’m realizing things.

There was a truck that turned behind me. I was in the middle of the street, partly because I’m an asshole, partly because I was listening to music and middle-of-the-street makes me feel more badass; partly because I really like to make little snake Sss in the street. The other part of me thought I was being careful by letting him see clearly that there was a person in the road. Less chance of hitting me, right? All of those thoughts flew past me in under 5 seconds and then I thought, What an idiot. Get out of the road dummy, and let him pass.

There was a moment when I really wanted to write down everything that I was feeling and seeing, but I also wanted to keep riding. I thought about putting my writing on hold and that was a new and unsettling sensation. We all know what happened. Here I am writing. But still… what does that mean?

I’ve gone further and further from home. Have I said that already? And once, I didn’t recognize where I was and I got scared for a second, and it was literally just a second. I’m on a bike. It’s not like I’ll have to walk back home. So it makes me more brave.

I’m getting paranoid. There was a bike stolen here just a few months ago, a child’s bike. But I’m afraid someone is watching my bike; just waiting for me to slip; to run inside for a quick potty break and my bike is alone in the driveway…

As I write this:

My bike is in the driveway. It’s hot outside.

Mosquitoes are biting me anyway.

I’d better get back out before the sun sets. I tried riding at night and it was terrifying.

17 thoughts on “Impressions While Riding My Bike”