This is a very exciting installment of Impressions While Riding My Bike. Me and my bike have taken to the road seeking adventure. I’ve been getting to know my neighborhood quite well, and it’s been, so far, an enlightening experience. But as you know, standing in place might as well be moving backwards. So it was time to take on a new challenge and a fresh experience.

I’ve been wanting to ride my bike by the beach for some time now.  But as I pulled into the nearly empty parking lot, stepped out of my car and unhitched my bike, I felt a familiar sensation of anxiety that comes with trying anything new. Thankfully, I crossed the street and was granted an immediate reward.

It took me much longer to get from the parking lot to beach then I expected. The bike is taken down from the bike rack. The bag that I packed with water, books and a journal for after my bike ride are put into my trunk for safety. The bike rack is removed and placed into the trunk. Check that I have my keys on me 8 times. Close trunk. Try to ride off. Realize rack bar is still on bike. Fight to get it off of bike. Open trunk. Place in trunk. Sweat gallons before bike ride even starts.

I have grown up in South Florida and have watched people ride their bikes beach side all of my life, but now I am one of them. I did go riding once with 3 friends, but it wasn’t the solitary experience that it is now. And you know how much I love solitary. Meanwhile, my heart is still racing and I don’t know why.

When I first took off riding, I felt so nervous and vulnerable that I almost forgot how to ride properly. I mounted on the sidewalk and when two women seemed to be coming my way, I promptly freaked out and scrapped my entire leg along the side of the stone wall. Great job, Lyz. I’ll have some scabs to mark the occasion for sure.

I literally had to mentally get my act together, hit refresh. I find it fascinating how a routine activity in a new environment can force us to realign our minds. Trying new things pushes us in that way. I never want to stop having new experiences.

The man in the photo above is a volunteer worker. It wasn’t long into my ride when I noticed him and then others. They are a volunteer beach clean up squad. Like superheroes for the environment! They scour the beaches of Fort Lauderdale picking up what others have left behind. It’s sad to think that for as long as I’ve lived here and enjoyed the beach, I’ve never once thought more than in passing to volunteer to keep it clean.

Sure I clean up after myself, reduce my plastic use and I complain about spring breakers and their utter disrespect for our beaches. To many of them this is just a pretty backdrop for their parties, but for some of us this beach has been a sanctuary and a friend. But what have I done to actively reverse the damage that’s being caused to our planet? Not much. Why should these men and women be carrying the burden of so many? I love the beach and I want to join some organized volunteering efforts. We’ve just got to preserve this. 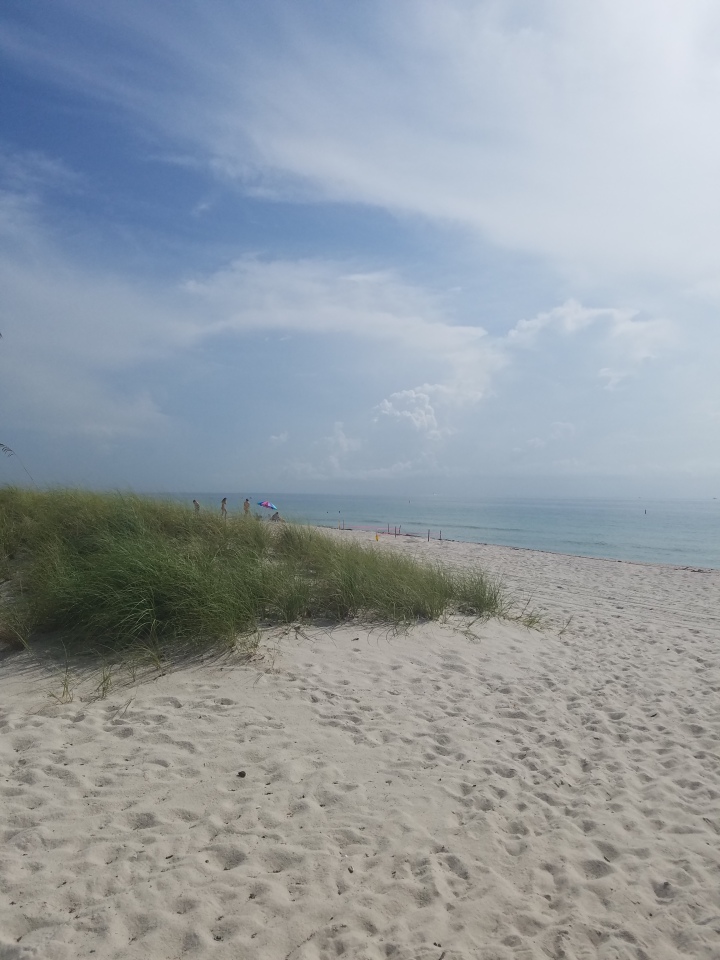 The clouds are absolutely the stuff of paintings. I wish that I could take the painters of the Baroque period, place them on this beach and see what they come up with. It’d be my gift to them. I wonder why I don’t see any painters on the beach, but then again I’m moving pretty quickly. Do people still sit on beaches and in open fields with paint and canvas?

Because I haven’t yet invested in a bottle holder for my water, I didn’t bring any along on my ride. It was so hot, and I didn’t want a back pack making me even hotter, so I left all that stuff in the trunk, as you’ll recall. The fact that I was singing out loud for most of the bike ride didn’t help my dried out throat any. But I rolled along steadily. I saw only the occasional bike rider on the left side of the street and plenty of people walking on my right.

You can’t throw a rock in Florida without hitting a palm tree.

I rode on for some time, feeling incredibly grateful for living in such a beautiful place as this. I’m pretty sure I had a huge smirk on my face the entire time. Really, the day was more picturesque than I could even had ask for. The clouds were bright and full, the day was sunny, it was the middle of the day and a work day.

I think the people who are at the beach on a weekday power walking alone or with spouses, the bikers who bike alone or with a friend, the people who lay on the beach and swim in the water, are enjoying a special slice of life.  People will spend more time working than anything else in their lives, and most people wait for two days in the week and two weeks in the year to enjoy their lives. It’s sickening. Why don’t you schedule yourself a ditch work day sometime this month to do something that you love. Don’t squeeze it in between laundry loads. Take the damn day and live beautifully. 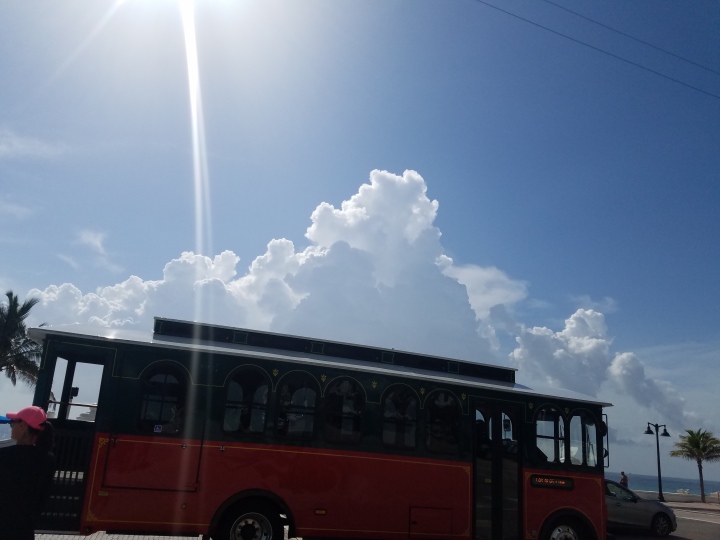 Here’s one of the city’s free trolleys. Again, I’ve lived here all my life and I’ve never been on one before. I wonder if the route this one takes is scenic and if I might not try writing on a trolley. That’s something I’ve never done. I could write on a trolley on the beach. It sounds intriguing. One more thing to add to my list of 500 things to do/research. I think it’ll be worth seeing what that’s like.

So I rode on enthusiastically. I nodded or smiled to the people I passed, just like I do around my own neighborhood. After all, if I’m going to make these beach rides a regular part of my life, which I will because it deserves it, I have to start getting to know the neighborhood and the people in it. I have to learn the etiquette. Once these people were going to take to the crosswalk as I was approaching and I almost ran them over with my bike. I yelled out an apology, but thinking on it now, I don’t think any blame was mine. Don’t you hate when you just reflexively throw out unnecessary apologies and the other person just accepts it?

When I felt like my legs were beginning to burn, I pushed a little further, then decided to start making my way back (though it was mostly because of my lack of water situation). I stood at a walkway with the sun beating down on my back for what seemed like 10 minutes waiting for all 4 lanes of traffic to be clear for me to cross. To be honest, I let pass a couple of opportunities because I felt extra cautious in my new environment Actually, I was a bit of a chicken. But my lack of sunscreen and the fire on my back finally encouraged me to be a bit bolder.

Finally, I made it across. There was a biker behind me some ways and for a while it made me nervous. Here I am this novice in the bike lane slowing him down. I was tired but tried keeping up a fast pace for his sake. But I eventually talked myself into remembering that if he’s a better biker then and he’ll probably just pass around me. I reminded myself that this ride was for me and that others don’t matter. Everyone was out there to enjoy their time and get into a zone. I needed to hold onto my own zone.

Not only did that biker eventually pass me, I ended up having to pass another biker myself. That was a proud moment. I was getting really tired and was happy to arrive back at my car and guzzle some water and walk over to the beach with my bike.

The beach always has a different presentation for it’s visitors. Some days the waves are high and crashing and dark; sometimes they swell, sometimes there are no waves at all. This beach day was one of my favorite kinds: clear cool water, moderate waves and sun creating sparkles on the surface. 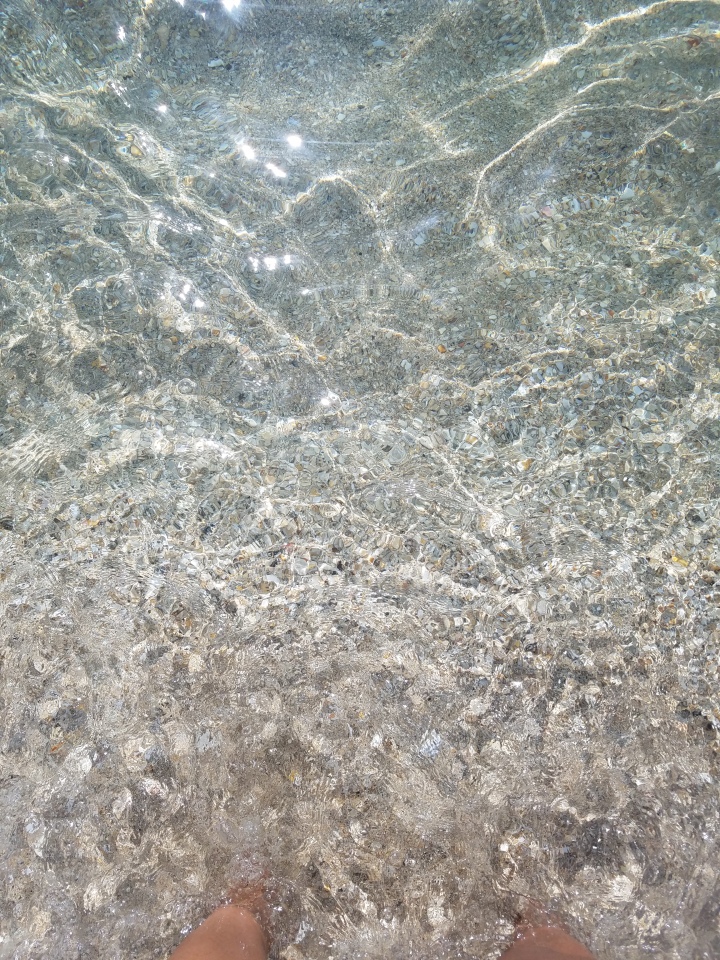 My actual bike ride reached about 40 minutes and I’m happy with that. I was sweating and exhausted, so I put my phone down and went into the water where I spent the next 20 minutes or so. The packing and unpacking of the bike as well as the ride itself took a lot out of me so I was happy to just relax and stretch my legs in the water. I imagine that bringing a yoga mat to stretch next time might be worth a try.

Within the confines of this caution tape and buried under the sand are sea turtle eggs. My brother has a story where he and his girlfriend fell asleep on the beach only to wake up to sand being kicked in their faces. Apparently, a huge sea turtle, possibly a threatened Loggerhead, came out of the ocean, laid it’s eggs and was in the process of covering them up. You’d think a turtle might move away from two sleeping humans, but I’ve seen how slowly those turtles move on land, so he probably said screw it, I’m not dragging my heavy turtle butt further down the beach.

The idea of those tiny, one day old babies making their way into the vast deep ocean is just incredible. Hopefully one day I can watch it happen.

My apologies for random speedo guy. That is atypical of a Florida beach, but he wants golden thighs and comfort, I suppose. Can’t be mad at a guy for that.

The sea turtle conservation workers place a “lid” over the eggs with a little door to help guide them to the ocean once they hatch. Of course, Mother Nature normally takes care of these things on her own, but with the lights of businesses, homes and high rises across the street, the turtles are easily confused and sometimes misguided.

Broward County, I am proud to say, does have a light pollution ordinance. Sadly, however, of the sea turtles that rely on South Florida, they are all endangered except for the Loggerhead which is threatened. Loggerheads reach about 6 feet long. The largest recorded was 10 feet! Light pollution is a problem in increasingly larger areas of the world. If you’re wondering what the big deal is, here’s a link that will give you some insight into the problem and some ways to help.

My mission is to start much earlier next time to avoid so much sun exposure. Thank you so much for joining me on my bike ride. I hope that wherever you are in the world, you’re pushing yourself to get out there into the world and try new things.

How have you pushed yourself lately?

14 thoughts on “Impressions While Riding My Bike: Beach Edition”