However, if you want to laugh at, and shake your head at, and feel included in a shared farcical and complex humanity, read this book. Actually, every adult should read this book. If Perrotta’s publishers paid me, I’d travel the country preaching its merits. But they aren’t doing that, so I’ll sit in this chair and speak my piece (and let Amazon pay me instead)*. Actually, I’ll let the book speak first. Here are some spoiler-free excerpts for your miserable pleasure.

THE YOUNG MOTHERS WERE TELLING EACH OTHER HOW TIRED they were. This was one of their favorite topics, along with the eating, sleeping, and defecating habits of their offspring, the merits of certain local nursery schools, and the difficulty of sticking to an exercise routine. Smiling politely to mask a familiar feeling of desperation, Sarah reminded herself to think like an anthropologist. I’m a researcher studying the behavior of boring suburban women. I am not a boring suburban woman myself[…]

Morning snack time was ten-thirty on the dot, a regimen established and maintained by Mary Ann, who believed that rigid adherence to a timetable was the key to effective parenting. She had placed glow-in-the-dark digital clocks in her children’s rooms, and had instructed them not to leave their beds in the morning until the first number had changed to seven. She also bragged of strictly enforcing a 7 P.M. bedtime with no resistance from the kids, a claim that filled Sarah with both envy and suspicion. She had never identified with authority figures, and couldn’t help sensing a sort of whip-cracking fascist glee behind Mary Ann’s ability to make the trains run on time.

Still, as skeptical as she was of fanatical punctuality in general, Sarah had to admit that the kids seemed to find it reassuring. None of them complained about waiting or being hungry, and they never asked what time it was. They just went about the business of their morning play, confident that they’d be notified when the proper moment arrived. Lucy seemed especially grateful for this small gift of predictability in her life. Sarah could see the pleasure in her eyes when she came running over to the picnic table with the others, part of the pack for the first time all day[…]

Of course, no system is foolproof , Sarah thought, rummaging through the diaper bag for the rice cakes she could have sworn she’d packed before they left the house. But maybe that was yesterday? It wasn’t that easy to tell one weekday from the next anymore; they all just melted together like a bag of crayons left out in the sun.

Long after she had come to the conclusion that the rice cakes weren’t there, Sarah kept digging through the diaper bag, pretending to search for them. It was a lot easier to keep staring into that dark jumble of objects than to look up and tell Lucy the truth. In the background she heard someone slurping the dregs of a juice box.

One might say that I love this scene (which goes on in more detail than I’ve included here) because I was always the mom who forgot to pack the snacks, the water, shit, sometimes even the diapers. But it’s more than that.

This is the scene that opens the novel and it sets the stage for one of the major themes of Little Children: adults feeling out of place in the adult worlds that they inhabit, and, in fact, create for themselves.

Sarah was a die-hard feminist in college with dreams of becoming a respected professor of Women’s Studies, guiding budding university women toward changing the world. Now she sits on a playground listening to mind-numbing mom talk and fumbling for snacks that she forgot to pack. The sound of someone “slurping the dregs of a juice box” is really the sound of her humiliation and slow suburban death.

Then there’s Sarah’s husband, Richard, “who is becoming more and more involved with an Internet fantasy life than with his own wife and child.” (book jacket)

Richard had been divorced for almost 2 years when he started seeing Sarah. They hit it off right away, though he suspected later that this instant intimacy had less to do with any real connection between them then it did with the fact that they were both desperately lonely and waiting for someone to rescue them. At the time he’d been drawn to her bitter sense of humor, her youthful body, and her enigmatic sexuality[…] she seemed to appreciate his social ease, his liberal politics, and, though she never really said so, the promise he held out of liberation from Starbucks and long-term financial security, at least once his daughters graduated from college.

They’d been married for less than a year when she got pregnant. This time around Richard had no mixed feelings – he was thrilled with the idea of bringing a child into the world, consciously and without regret, correcting the mistakes he made with the twins (they blamed him for the divorce and were no longer speaking to him, though they were happy to accept buckets of his money)[…]

He tried, he really did, for at least the first year. He said all those things new fathers were supposed to say and changed his share of diapers. But sometimes he found himself wishing that Lucy was a boy. He had two girls already, why does he need a third? And sometimes when he was stuck at home with the baby on a rainy weekend, he found himself overcome by a familiar sense of claustrophobia and resentment, as if he were once again a young man throwing away the best years of his youth[…]

He still hadn’t gotten over how completely he’d misread his own needs. He just assumed he was evolving and improving as a person, but all he’d really done was repeat his own failure, this time with his eyes wide open and no one to blame but himself.

There’s Todd, a beautiful specimen of a man, stay-at-home dad studying for the bar exam, again. Falling into law because he was smart and had no other ideas, he dreads every day spent studying and future that a passing score brings with it. He can’t remember why he thought being in a profession that required daily wearing a suit and tie was something he’d ever want. Here he describes taking the Bar Exam.

The only thing worse than having to retake the bar exam was having to study for it again, like an actor memorizing lines he knew he’d forget the moment he stepped on stage.

The bar exam was a two-day marathon, as much a test of physical endurance as legal knowledge. Day One was the MBE, two hundred nitpicking, densely worded multiple choice questions, a mental root canal that made the SAT seem like a routine cleaning by comparison. Once they had you thoroughly battered and demoralized, they made you trudge back on Day Two for the essay section, which for Todd, at least, was even worse:  an eight-hour confrontation with the blankness of his own mind, the white noise of his inability to think made even louder by the furious scratching of his fellow test-takers’ pens and pencils. It was as if he’d never gone to law school at all, as if he were living through an endless, real-time version of the nightmare in which you find yourself naked in an unfamiliar classroom, taking a final in Swahili or electrical engineering, some subject about which you know exactly nothing, except that you enrolled and somehow not managed to attend any classes.

And there’s his wife, Kathy, the documentary filmmaker, wrestling her way up the public television ladder to finally be able to make the films that she wants to make. Here she describes what keeps her going.

She had friends from Film School, people in their thirties, we’re still living in run-down apartments in Brooklyn and Somerville– with roommates!—  deferring marriage and children, scraping by without health insurance or dependable cars, still trying to nurse their useful dreams of making honest, non-commercial, socially conscious movies, dreams that were becoming more and more unlikely with each passing year.

All along, her ace in the hole, the thought that saved her from the tedium and petty politicking of public television and the bourgeois economic despair that was always gnawing at her– How will we ever be able to buy a house, take a nice vacation, send our kids to a decent college, etc., etc.?— was the prospect of Todd becoming a successful lawyer, making enough money to support the family in the style she believed they deserve to live, while at the same time freeing her to have more children ( and more child care), and to work only when she wanted, and only on projects she believed in. All that was standing in their way was one stupid test.

Her plan–  it was so humble, so eminently doable— made so much sense that she couldn’t quite bring herself to let go of it even now, when she had no choice but to admit to herself how miserable it had made her husband.

Dear Readers, you’re going to want to follow the lives of the characters in this dark comedy. You’ll shake your head in disbelief, while simultaneously nodding your head, acknowledging the incredible similarities among us. You’ll see yourself and those you know characterized in this book. You’ll suddenly bust out laughing and surprise yourself. Tom Perrotta knows a thing or two about the human condition and the struggle that we call adulting.

Perrotta’s writing style is descriptive without being slow. It’s insightful without showing off. He writes about serious stuff without tossing a wet blanket on it. Humor and Insight have prominent seats at the table. He speaks of the universal through the specific. Perrotta doesn’t lash out at his characters; he pats them gently on the head and sends them away with a smirk, yet we, the readers feel something more. I’ll let you discover what that something more is.

*Get Little Children by Tom Perrotta on Amazon. This is an affiliate link as I quite enjoy making money. No shame in that ladies. Your support is much appreciated! 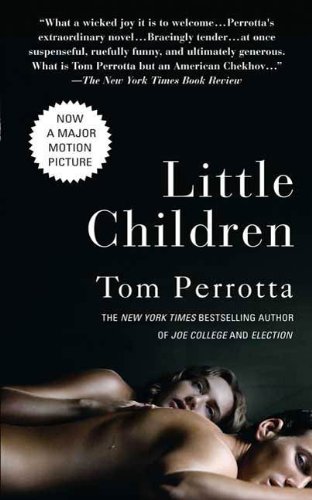 For those of you who will read or have read the book, I’d love to do a Facebook Live video discussion one month from now. I’d like to say tentatively March 5th, 2018. If this is something you may be interested in, please let me know. I want to continue bringing you ladies great content and expand the ways that we can connect.

My name is Lyz-Stephanie and I want to inspire you to be more connected to yourself and the world, to find beauty in simple pleasures, and to have more adventures. Every day we can do something to make our lives happier and richer, make our minds more active and engaged. I’m on the journey. Will you join me?